By Shannon Whiley (University of Queensland)

[This excerpt was released as a preview. The full paper was published in mid-2018 and is now available in NVJS 10.]

This study focuses on three Nikkei-Australian soldiers and their families, and builds on existing research by analysing the soldiers’ respective military experiences with reference to archival information I have located. These soldiers are Mario Takasuka [1910–1999], Joseph Suzuki [b. 1922] and Winston Ide [1914–1944]. These men are notable because their varying backgrounds and experiences, when examined together, highlight the different social and legal attitudes toward Nikkei-Australians during World War II. 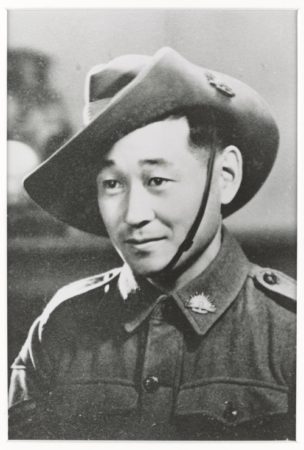 Official treatment of Nikkei-Australians in the 1940s was heavily influenced by the White Australia Policy and the outbreak of World War II. The term ‘Australian-born Japanese,’ appearing in official documentation from the time, indicates that Nikkei-Australians were not officially recognised as “real” Australians (Haid 2011, 128). Not only were they seen as foreign, but they faced further discrimination  because they shared the same heritage as the enemy. Interestingly, this did not result in the three chosen Nikkei-Australians turning away from the country that had rejected them, nor did it sway them from enlisting. Instead, they made the decision to fight for a country that imprisoned their families and distrusted them, even going so far as to falsify information or attempt to enlist multiple times, because they believed it was their duty and right as Australians—evidenced by Suzuki’s assertion that he “was entitled to serve Australia” (Nagata 1996, 106). In doing this, they went against the stereotypes and assumptions held by the government and the greater Australian community, as exemplified by the White Australia Policy and Pearson’s and Barnwell’s racial theories, which popularised the idea that Nikkei could not assimilate.

The analysis that follows investigates the links between Nikkei-Australian identity and treatment of Nikkei-Australians by the Australian government and their local communities during World War II, looking at the schisms between three different images of Nikkei-Australians: how Nikkei were seen bureaucratically and legislatively, how they were seen by their local communities and peers, and how they saw themselves. This discussion will also draw on the experiences of the Japanese diaspora serving in the military in Canada and the United States, as well as Australian soldiers of non-Nikkei racial minority backgrounds, which have been more substantially documented and researched than those of their Australian counterparts.

The three Nikkei-Australian soldiers chosen for this study enlisted at a time when Australian identity was often linked with race—particularly in legislation, where the Australian community was defined “in terms of colour” (Haid 2011, 61). However, those who identified as both Australian and Japanese, or who identified as Australian but looked outwardly Japanese, did not fit the stereotypes of ‘foreignness’ prevalent in Australian society at the time. These stereotypes served to conflate Nikkei-Australians with the soldiers in the Japanese military that Australia witnessed during wartime, who were regarded as “subhuman beast[s]” and “vermin” (Saunders 1994, 325–27). Moreover, they were thought of as being absolutely loyal to Japan (Oliver 2002, 275).

However, the experiences of Nikkei-Australian soldiers during and before the war suggest that they considered themselves Australian, or at least outwardly identified as such. In particular, Japanese-born Joseph Suzuki appears to have identified strongly as Australian and distinctly not as Japanese. This is highlighted by his own reported assertion that he was “Australian to the backbone”, and is reinforced by other indications such as his refusal to mingle with Japanese nationals during internment, and potentially also his Australia map tattoo (Nagata 1996, 105–8). His sister spoke of him as always being “a loyal Australian. The proof is that he got a medal from the Queen” (Nagata 1996, 235). His mother testified that he had pro-Australian views (Oliver 2002, 285).

Statements made by Mario Takasuka suggest that he also felt stronger sympathies towards Australia, where he was born and raised, than to his familial ties to Japan. Takasuka is described by Sissons (1980) as “a man of strong patriotic sentiment”, and evidence suggests this may be true (168). Of the Japanese influence on his upbringing, Takasuka had this to say:

My mother…brought us up on part Japanese food. Well, English-Japanese food, because she had to cook it on a wood stove and that sort of thing… We kids never learned to use chopsticks. We always used knives and forks… Father was a typical Japanese father… Both father and mother sang Japanese songs and they would make up verses and rhymes to celebrate something or designate something, or whatever. It seemed to be part of their upbringing… [Mother] played the Japanese instruments that we had there in those early days… I don’t know what they were called.
(Lewis 2012, 31–32)

His words portray a typical country Australian upbringing with some Japanese cultural influence. His lack of knowledge regarding the Japanese music and songs of his parents seems to indicate a disinterest in and disconnect from his parents’ culture, indicating that he too may have identified more strongly with Australia than with his Japanese heritage. There are fewer primary sources relating to how Winston Ide self-identified, however the fact that he never made his heritage known to Japanese authorities during his time as a POW does suggest an allegiance to the Australian military.

This corroborates the findings of research on North-American Nikkei which showed that Nikkei soldiers were often raised in multicultural environments, and identified with the country they were raised in. In the US, for example, many Nikkei-American soldiers saw themselves as American while still preserving their cultural and emotional ties to Japan (O 2011, 121–23, 204). Many put more weight on their non-Japanese heritage, outwardly appealing to be recognised as a part of their immediate local communities. Nikkei-Canadian soldiers, like their Australian and American counterparts, emphasised their love for Canada and their desire to be recognised as Canadians (Ito 1984, 164). Clark and Russell (1945) assert that Nikkei-American soldiers resented being set apart from other Americans and being called “Japs” or “Yank-Japs”; they preferred to simply be called “American” (701). This is a clear indication of their stronger associations with the country they were raised in, and a desire to be recognised as a part of that country without qualification.

Nikkei soldiers abroad saw enlistment as a way of proving their loyalty to, and achieving equality as citizens of, the countries where they were raised. Roy Ito’s We Went To War (1984) asserts that in Canada, the Japanese diaspora joined the military to fight for the rights of Nikkei-Canadians, prove that they were loyal, and thereby fight against governmental discrimination (8). Likewise, many Nikkei-Americans enlisted in military service to prove that they were good Americans and “basically no different in attitude or loyalty from American citizens whose forebears came from other lands” (Clark and Russell 1945, 698). Ken Ishii (2008), a Nikkei-British man who was drafted into the Japanese army, affirms this, stating, “In war you were forced to choose where your loyalties lay” (22).

Another common reason for enlistment was related to internment. In the US, some Nikkei-American internees were given the choice to serve in the military rather than continue their internment, providing an opportunity for freedom or variety in life that was denied while they were interned (Maranzani 2011). Some internees enlisted because they believed that their similarly interned families would be treated more favourably, or be given a better chance of release (O 2011, 210). In Australia, other non-European soldiers had similar reasons for enlistment. For many Indigenous Australians, the military was the first environment where they experienced equal treatment, as they were entitled to the same wages as non-indigenous soldiers. According to John Moremon from the Australian Department of Veterans’ Affairs, they felt a sense of equality in serving, and joined in the hope that their service would help to advance equality and improve the chances of Indigenous Australians achieving citizenship during peace time (Moremon n.d.). Others joined out of fear of being ostracised for “staying behind”, or because they “believed the war was just; others sought adventure, good pay, or joined up because mates did”, just as many European-Australians decided to do (Moremon n.d.).

Did these reasons apply to the three individuals chosen for this essay? It is impossible to say. However, early releases from internment were granted by the Australian government to some Nikkei-Australian internees, and an examination of these early release cases presented in Nagata’s (1996) research shows that the Australian army did give special consideration to internees whose family members had enlisted. This included Winston Ide’s father Henry, who was released from Hay in 1942 (Nagata 1996, 103–8). Based on this, we can tentatively conclude that, for some, the possibility of family members’ release from internment may have been a factor behind the decision to enlist. Joseph Suzuki’s statement that he was “entitled” to serve may imply that he also desired equal recognition (Nagata 1996, 106). This, along with other previously stated gestures, suggests that like their North American and Non-European Australian counterparts, Nikkei-Australians who enlisted may have done so as one way to fight for recognition, with entrance into the military a clear sign of being accepted as insiders in the community (Ito 1984).

Lewis, G. 2012. The Growers’ Paddy: Land, Water, and Co-operation in the Australian Rice Industry to the 1990s. Sydney: The University of Sydney Co-operatives Research Group.

O, Y. 2011. “Cultural Origins of the Kamikaze Special Attack Corps and the 442nd Regimental Combat Team During World War II: A Comparison Between the Japanese Soldiers Raised in Japan and the Nisei Soldiers Raised in America.” Dissertation, Oklahoma State University.